I wanted to share with you all a case that we had recently at NAAH that really put everyone through a range of emotions. Christy is a 9 year old Labrador that began seeing us in 2017. She's such a sweet girl, and it's so exciting getting to see her when she comes by. She normally comes with her sister, Summer. They are both the sweetest dogs ever. Christy has these big brown eyes that draw you in to immediately pat her head or give her a scratch on the chin. Christy had gained a little weight in 2018 and her owner wanted help to get her weight down. When Christy came in for a dental cleaning in January, she had lost 15 pounds. Great, right? Well, I was pretty excited until I looked a little closer. What should have taken her 4 months to lose, had only taken her 2 weeks. Her labwork was totally normal. Given Christy's breed and age, I had a sinking suspicion something more nefarious was the culprit. An ultrasound of her abdomen confirmed what I had feared. She had a tumor about the size of a baseball coming from her spleen.

Here's the deal -- when we find a splenic tumor in a patient, it's almost always best to surgically remove the spleen. This is because splenic tumors are at risk of rupturing, leading to bleeding in the abdomen.  With most cancerous tumors in dogs, we can know what specific type of tumor we are dealing with prior to surgical removal. This helps us and the owner know the pet's prognosis, survival time post surgery, etc. With splenic tumors, we can't do this prior to surgery. We have no idea what specific type of splenic tumor it is until after surgery. A benign type of tumor means a wonderful prognosis with a normal life expectancy, whereas an aggressive, malignant tumor is quite the opposite. So, until we perform surgery and send the tumor to a pathologist, it's an anxiety-ridden waiting game.

Christy's surgery was scheduled for 2 days later. Everyone was rooting for Christy on surgery day. From the client service reps greeting her when her owner brought her in, the technicians getting blood samples prior to surgery and basically anyone within arm reach of her, Christy got a reassuring pat on the head. Surgery went great and she went home the next morning. Now for the hard part -- waiting. For 4-5 days, we wait to hear back from the pathologist. The weekend passed and the next work week began. Finally on Wednesday, I got an email saying that the pathology results were in...the tumor was benign! What great news! I called the owner immediately and he was overjoyed. He was thrilled that Christy, his faithful friend, who had been a constant companion for him for a long time, would be around for a good while.

Now that's something we can all celebrate. 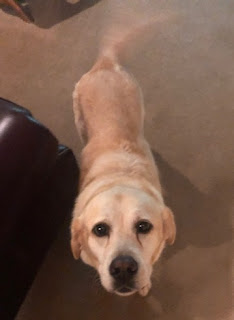 - Christy and her big brown eyes -